Sometimes you meet a truly great mind, brilliant in so many ways, totally awe-inspiring. But after a while you may also find that there is a scary streak of insanity running somewhere deep down between the folds of his oversized brain.

That’s probably how even the most sympathetic Germans feel about America and its obsession with firearms.

When tragedy strikes again somewhere in America, Germans find their concerns naturally reinforced. Is it not obvious that the prevalence of guns enables those mass killings?

That’s the thinking of a nation in which most civilians during their lifetime will never see, leave alone touch a gun. In Germany, if you have a gun, chances are that you are a criminal or a cop. Hunters or members of a sport shooting club may legally own firearms, but those are not commonplace hobbies – hunting is actually a rather prim affair. An estimated two million Germans, or less than 4% of the adult population, legally own guns.

So when over business lunch the small talk turns to family, it’s quite startling for most Germans when their American counterpart mentions in passing that he just taught his 9 year old son how to shoot a rifle so that he can take him hunting next year.

That, of course, reflects the attitude of a country where firearms are a commodity. An estimated 300 million firearms are in private hands – about one for every man, woman, or baby – and over 30% of adults legally own guns.

It also reflects a much more violent society. The rate of people dying from intentional violence in the United States is eight times higher than in Germany. (These are deaths per capita, so already accounting for the different size of the population.) While these rates are for violent deaths in general, a similar or even higher ratio seems to apply to gun deaths.

America is not alone in that category, though. In the global comparison of violent deaths, the United States rank smack in the middle, 100th of about 200, in the company of nations like Haiti, Cuba, Albania, Uruguay, Argentina, or Kyrgyzstan.

Still, we find violence in America more disturbing than in other countries. Why? Because this violent streak is in such stark contrast to the overarching perception of America as the epitome of modernity and progress.

Admittedly, that formidable reputation isn’t quite what it used to be when post-World War II Germans learned in amazement about all the space-age conveniences of modern life that dotted the American way of life. But even if the iPhone is not as impressive as a moon landing, it’s still in America where it happens first.

In the German understanding, progress is an intellectual concept that encompasses the whole society. Progress is enlightenment. Progress is that the people living in Neandertal today don’t use clubs anymore to argue for their fair share of the quarry.

Germans simply cannot reconcile the progress that they observe in America with the violent character of the nation. That’s because the driving force for progress in America is totally alien to them.

Progress in America is the quest for the frontier. The historic frontier, the westward expansion, was a violent affair, of course. It was marked by self-reliance, forward thrust, a lack of concern for history or eternity, and a belief in limitless resources and opportunity.

These characteristics did not evaporate when that frontier closed. Even as Americans turned to new frontiers, be it geopolitical, or be it in science and technology, progress retained a visceral, materialistic quality.

That is the reason why America can run faster than any other country when it sets it sights on a goal. It is also the reason, why progress in America does not do much to refine society. Or more precisely: It is this type of society, and the underlying raw power, that enables the progress we see.

That dazzling progress also obscures the fact that America is two countries in one.

The high-tech America that the world talks about is anchored mostly at America’s fringes, the eastern and western seaboards. Many foreigners don’t realize that America’s heartland is not as much an industrial as an agricultural superpower. In fact, the United States are the world’s largest exporter of corn, wheat, almonds, cotton, and other commodities.

The rural world of the heartland is difficult to understand for people from Europe’s urban societies. In Germany, 81 million people live on an area a little smaller than Montana, which is home to not even one million. You are rarely on your own, and if you are in trouble, law enforcement can usually respond within minutes.

So if something bad happens to you, you don’t go for your gun. You call the cops. It’s their job, after all, to deal with criminals.

That’s quite different for someone living on a ranch in rural Nebraska, where at night a single deputy might be patrolling a county larger than some states. If you find yourself the victim of a violent crime, you may not be in a position to wait for the cavalry to arrive. Self-reliance becomes a necessity.

So even though the western frontier has closed, it still resonates here in quite practical terms – not the least in terms of the vastness of the landscape. I think, by the way, that every visitor to the United States should allocate some time in their itinerary for traversing the Midwest. You need to see it to understand. 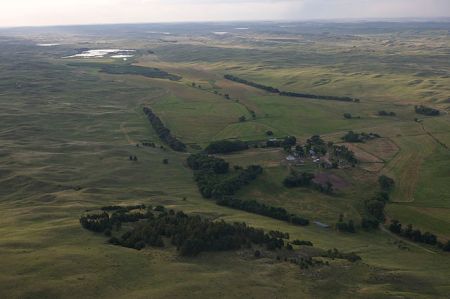 As much as the views differ on the merits of private gun ownership, it is worthwhile noting that both approaches have a reasonable logic.

If I live in a place where violence is abundant and help may be hard to come by, I would be crazy to give up my firearms and throw myself at the mercy of the government to protect me from death or great harm. (That is particularly true if I profoundly mistrust the government, as Americans do – that mistrust being one reason to have guns in the first place.)

And not surprisingly, the massacre on Utöya, Norway a year ago is often cited as an argument in favor of self-reliance, noting that it is unlikely a lone gunman would have been able to kill 70 people over the course of an hour if anyone had had the ability to defend themselves. The point is hard to argue with.

If, however, I live in a place where violence is rare, few people own guns, and confidence in the police is high, it would seem crazy to allow everyone to have a gun on the off-chance that it may help someone to defend himself. After all, with every gun in circulation, the risk of collateral damage through accidents, improper handling, or madness increases.

Case in point: The two well-remembered mass murders in Germany’s modern history, both of them school shootings, were committed with weapons purchased legally for sport. (Actually, the same seems true for most mass killings in the United States.) So it’s not unreasonable to argue that fewer guns result in fewer deaths.

The Germans’ aversion to private gun ownership is certainly not just rooted in the goodness of their hearts.

Historically, the monarchs in old Europe had little interest in arming their citizens (pretty much for the same reasons that Americans preferred to arm theirs). That changed to a certain extent under the Nazi regime, until World War II was lost and the allied forces ordered all private citizens and public officials to be completely disarmed.

So ironically, it was the Americans who helped introduce the anti-gun culture to modern Germany.

In the early 1970s Germany enacted new comprehensive federal gun legislation, heavily restricting private gun ownership. And the trend since, with much public support, has been towards more restrictions. After each of the mass shootings mentioned before, the gun laws were tightened to the point, in 2009, that gun owners are subject to unannounced inspections of their homes.

But more fundamentally, in a key lesson from the atrocities of Nazi Germany, the German constitution makes life, or rather the “dignity of human life”, untouchable. As a result of this principle, any kind of killing, whether justified or not, is frowned upon.

In the last ten years, police officers in all of Germany have killed about 7 people per year, and less than one police officer, on average, died in the line of duty each year. The use of snipers for the targeted killing of hostage takers is highly controversial and rarely authorized unless there is a clear and immediate threat to someone’s life. Life itself, whether that of a criminal or an innocent, enjoys the almost absolute projection of the constitution.

In the United States, life is not such an absolute value. The value of your life depends on who you are and what you do and is easily forfeited. Even the most ardent proponents of stricter gun control in the United States will agree: If you leave home to commit a crime, however minor, you better be prepared to die.

Nobody will fault police officers for killing a perpetrator in a hail of bullets. Nobody will blame a homeowner who shoots at sight to kill a burglar. There is a general sense that it’s ok to defend oneself with all means available, even if the response is overkill.

While all this remains consistent within the logic of a violent society, it undeniably comes with some collateral damage:

Bystanders injured by police bullets. A jogger killed by hunter who mistook him for a deer (the jogger was later blamed for not wearing blazing orange during hunting season). A trick-or-treater shot to death by a homeowner who thought he was a burglar (or who maybe just didn’t like trick-or-treating, but was acquitted anyway). A toddler killed when playing with daddy’s gun.

And then there is the curious logic-defying trend over the last few decades to encourage the proliferation of guns even as violent crime rates decrease. Most notably: The liberalization of concealed carry in almost all states, and the expansion into the National Parks which were not generally known for an abundance of violence.

It seems that as Americans increasingly struggle to identify their frontier, the gun culture takes on an amazingly vibrant life of its own.

That, indeed, is a little scary.