Sometimes you meet a truly great mind, brilliant in so many ways, totally awe-inspiring. But after a while you may also find that there is a scary streak of insanity running somewhere deep down between the folds of his oversized brain.

That’s probably how even the most sympathetic Germans feel about America and its obsession with firearms. END_OF_DOCUMENT_TOKEN_TO_BE_REPLACED

Despite (or because of?) the unproductive legislative drama often associated with major issues, U. S. lawmakers seem to enjoy creating instant bills for problems that we never knew we had. 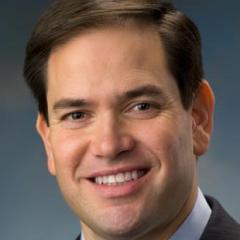 Marco Rubio | U. S. SenateJust in time for the London Olympics, Senator Marco Rubio identified an injustice that has threatened the well-being of U. S. athletes since decades: They have to pay taxes on the prize money they bring home.

As it is decidedly mean to tax our national heroes, Rubio was quick to introduce a bill to exempt their winnings from taxation.

Questions come to mind, of course. How much taxes did past Olympians ever pay after sport-related deductions? Do we want to complicate the tax laws with another loophole to benefit about 100 people? If we exempt Olympians, do we equally cherish our Nobel prize winners, military heroes, police, firefighters, job creators?

But one rule of kneejerk lawmaking is that practical questions must not be asked. After all, it’s usually a matter of national pride (or national outrage).

Fortunately, its low efficiency prevents Congress from wreaking too much havoc: Out of 27,114 bills and resolutions introduced in 2005-2009, only 943 laws were enacted. (For comparison, during the same period, the German parliament considered 2,742 bills and resolutions and enacted 616 laws.)

How do you explain the Chick-fil-A row to someone outside the United States? Most people would assume that a public uproar involving chicken and sex must be about a case of bestiality or worse. They would be rather puzzled by the tenuous link between chicken consumption and a political issue that they may find far from earth-shattering. END_OF_DOCUMENT_TOKEN_TO_BE_REPLACED

I stand corrected. Supreme Court Justice Antonin Scalia went on Fox News Sunday saying: “I don’t think the court is political at all”. 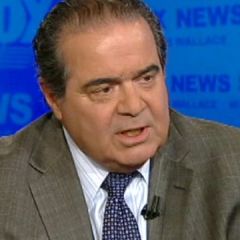 He conceded, though, that people might have that impression, but that’s because of how the justices are selected – for their “judicial philosophies”. Republicans choose “originalists and textualists and restrained judges”, Democrats choose “the opposite, people who believe in Roe v. Wade”.

So justices don’t vote their politics, they vote their philosophies. Fine. There is no reason not to take Scalia’s word for it.

Whether, however, at the level of the Supreme Court there is any significant different between philosophy and politics, would be an interesting conversation. Both are fundamentally about values, after all.

What is clear, though, is that there is no lack of political skills on the Supreme Court. To make his colleagues choose between either being an “originalist” or being “pro-abortion” is such an artful form of slanting, that I once again tip my hat to Scalia.

“A moment of great drama” – that’s how Jon Stewart lampooned CNN’s botched reporting of the health care ruling. And thinking about it, drama seems to be a lifeline of American politics. END_OF_DOCUMENT_TOKEN_TO_BE_REPLACED

Some assert that a formidable jurist like Chief Justice John Roberts would never be guided by anything but his constitutional scholarship. That is, after all, what we expect from a Supreme Court justice. But more plentiful and more thrilling, of course, were the opinions on the health care ruling that had Roberts in turn furthering, fearing, or sabotaging a liberal, conservative, or neutrality agenda. END_OF_DOCUMENT_TOKEN_TO_BE_REPLACED

The Authority of Law by James Earle Fraser, guarding the west side of the United States Supreme Court building | Matt H. Wade

Last week’s health care ruling by the United States Supreme Court had many commentators arguing whether the decision was a proper discharge of judicial authority, or if it had been tainted by political considerations.

This question, laced with speculation of court intrigue and outside pressure, seems rooted in an eternal concern Americans have with their Supreme Court. END_OF_DOCUMENT_TOKEN_TO_BE_REPLACED